Mr. Christian Guillermet-Fernández was born in November of 1963 in San José, Costa Rica.

He has been a Foreign Service Officer since 1998. He has ample experience in multilateral affairs. He also has studies in Law and International Relations.
Most recently, Mr. Guillermet-Fernández was the Deputy Permanent Representative at the Permanent Mission of Costa Rica to the United Nations in New York.

His last international post before going to New York was as Deputy Permanent Representative to the United Nations in Geneva (2010 to 2015). Before that, in 2009 he was at the Permanent Mission of Costa Rica to the United Nations in New York as Deputy Permanent Representative and Political Coordinator during the membership of Costa Rica to the Security Council (2008-2009).

From 2006 to 2008, Mr. Guillermet-Fernández was Director General of Foreign Policy after working with the Office of United Nations High Commissioner for Human Rights in Geneva and in Santiago, Chile as the Regional Representative ad interim of the High Commissioner.
From 1993 to 1998, he worked at the Office of the Ombudsman in Costa Rica since the beginnings of the institution.

During his diplomatic career, he was Chairman of the Open-Ended Working Group at the United Nations for the Right to Peace, among others. He has also collaborated extensively with different universities and group of experts and has written for prestigious magazines around the world. He is specialized in Human Rights, Peace and Security,
International Humanitarian Law, International Law, Humanitarian Disarmament and an expert in the dynamics of multilateralism, particularly the United Nations.

Building forward better in the Caribbean post-COVID-19: critical issues to keep the 2030 Agenda in sight

Tenth meeting of the Presiding Officers of the Committee on South-South Cooperation, chaired by Costa Rica 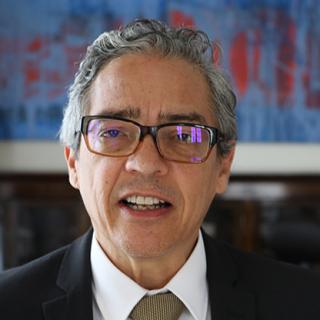