Home » Press centre » UN Agencies and Experts Call on Latin America and the Caribbean to Unite Visions Ahead of Food Systems Summit
Available in: EnglishEspañol

At a side event to the Forum of the Countries on Sustainable Development 2021, ECLAC’s Executive Secretary, Alicia Bárcena, urged the region to act with a single voice to promote healthier, more sustainable and more equitable food systems.
17 March 2021 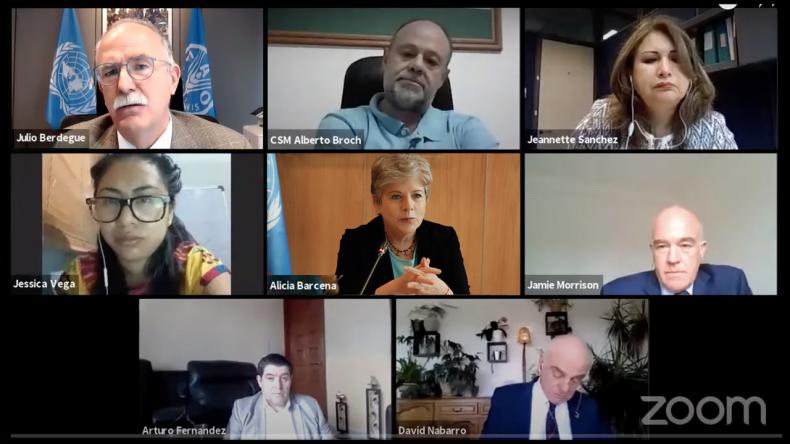 The region of Latin America and the Caribbean must unite visions and take a single voice to the United Nations Food Systems Summit, which will be held in September of this year, with the aim of implementing bold, new measures to advance on achievement of the 2030 Agenda’s 17 Sustainable Development Goals (SDGs), UN authorities in the region and international experts indicated today while meeting in the framework of the Forum of the Countries of Latin America and the Caribbean on Sustainable Development 2021.

In this regional conversation on Food Systems – the objective of which was to raise awareness and promote Latin American and Caribbean stakeholder engagement in the dialogue processes of the United Nations Food Systems Summit (UNFSS) – the participants included Alicia Bárcena, ECLAC’s Executive Secretary; Julio Berdegué, FAO’s Regional Director for Latin America and the Caribbean; David Nabarro, Senior Advisor to the UNFSS dialogue process; and Jamie Morrison, Director of the Food Systems and Food Safety Division of FAO, along with representatives of the Latin American Federation of Food Markets - FLAMA, Consumers International, Confederation of Family Farm Producer Organizations of the expanded MERCOSUR – COPROFAM, the Network of Indigenous Youth of Latin America and the Caribbean, and the CARICOM Private Sector Organization (CPSO).

In her welcome remarks, Alicia Bárcena emphasized that while we are all part of Food Systems, not all of us participate in them under equal conditions. She also announced that a pre-summit will take place in Rome, on July 19-21, 2021. “The United Nations Food Systems Summit invites us to reflect on these issues. On our lifestyles. On our role as consumers. To reformulate our relationship to the environment,” she stated.

ECLAC’s highest authority indicated that it is necessary to give greater impetus to new production models and she highlighted the development of the bioeconomy, for example, as a way to increase sustainability and inclusion in food systems, improving management and the use of resources, waste and byproducts all along the food supply chain.

“Latin America and the Caribbean needs to articulate a single voice ahead of the Food Systems Summit. Our region, which is an abundant food producer, must be capable of promoting and consolidating healthier, more sustainable and more equitable food systems,” Bárcena stressed.

Meanwhile, David Nabarro explained the process leading up to this Summit and how it will be organized. He indicated that the gathering is aimed at reaching an agreement on the path to follow to achieve sustainable and egalitarian food systems by 2030, in line with the targets outlined by the SDGs.

He added that the discussions at the Summit are organized around five action tracks and four levers of change. The action tracks are: 1) Ensure safe and nutritious food for all; 2) Shift to sustainable consumption patterns; 3) Boost nature-positive production; 4) Advance equitable livelihoods; and 5) Build resilience to vulnerabilities, shocks and stresses. Meanwhile, the levers of change refer to matters of gender, human rights, finance and innovation.

In his remarks, Jamie Morrison, FAO’s Director of Food Safety, emphasized that despite the significant progress made in various regions to achieve the different dimensions of the 2030 Agenda, it is clear that that many contemporary food systems fall short of delivering their potential across the full set of SDGs.

Finally, in the event’s closing remarks, Julio Berdegué emphasized that without transforming food systems in Latin America and the Caribbean, we have no chance of achieving SDGs 1 and 2: to end poverty and hunger. Between 35% and 45% of the population could end up in conditions of moderate or severe food insecurity due to the crisis, which is to say, four out of every 10 people find themselves in this situation well into the 21st century, he said.

“Our region is the planet’s main net exporter of food. Without Latin America and the Caribbean, the world would face more serious food insecurity situations. But we have to balance the equation: we must figure out how to continue being major food producers for the world, but do so in a way that settles the debts we have with our societies and with nature,” Berdegué declared.

Full video of the meeting Words by Alicia Bárcena, Executive Secretary of ECLAC (video in Spanish)