Home » Press centre » Countries of Latin America and the Caribbean Champion the Forum on Sustainable Development as an Indispensable Space for Regional Integration and Cooperation
Share
Available in: EnglishEspañol

The Fifth Meeting of this intergovernmental gathering was inaugurated by the President of Costa Rica, Carlos Alvarado, the Deputy Secretary-General of the United Nations, Amina Mohammed, and ECLAC’s Executive Secretary, Alicia Bárcena.
7 March 2022 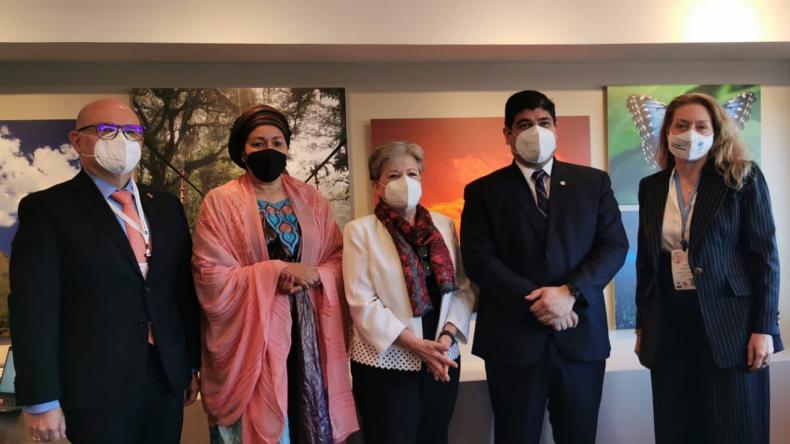 Representatives of the 33 countries of Latin America and the Caribbean championed the Forum on Sustainable Development as an indispensable space for regional integration and cooperation amid global uncertainty, during the Fifth Meeting of that intergovernmental gathering, inaugurated today by the President of Costa Rica, Carlos Alvarado; the Deputy Secretary-General of the United Nations, Amina Mohammed; and the Executive Secretary of the Economic Commission for Latin America and the Caribbean (ECLAC), Alicia Bárcena.

The Fifth Meeting of the Forum of the Countries of Latin America and the Caribbean on Sustainable Development – which is taking place in San José, Costa Rica, the country that currently holds ECLAC’s presidency – brings together more than 1,200 people, including government delegates and representatives of international and United Nations System organizations, the private sector, academia and civil society. Through Wednesday, March 9, they will review the progress and challenges related to implementation of the 2030 Agenda in Latin America and the Caribbean, the developing region most affected by COVID-19 from a health, economic and social point of view.

“These last few years have shown us that, in this interdependent world, it is not possible to survive alone, beyond the immediate term. We will never be safe if we do not save everyone. This is the clamor coming from our region, which allows us to put our attention, our efforts and pin our hopes on a future with dignity and with inclusive, sustainable and resilient development,” President Carlos Alvarado stated in his opening remarks.

Costa Rica’s leader warned that while Latin American and Caribbean countries are making progress in terms of income, achieving levels that place them in the category of middle-income or upper-middle-income countries, paradoxically they are losing – for that reason alone – cooperation opportunities and the attention of developed partners.

“These unidimensional classification criteria based solely on income (per capita) hide a reality that leaves out the needs of a great number of countries in the world and their most vulnerable populations. The international community for cooperation cannot leave our region behind,” the President underscored.

Meanwhile, the Deputy Secretary-General of the United Nations, Amina Mohammed, stressed that in many ways, Latin America and the Caribbean has given birth to the Sustainable Development Goals (SDGs).

“As the world faces unprecedented challenges, we need the region’s leadership to ensure that we ‘rescue’ the SDGs and build a future of peace, dignity and prosperity. Together, we can do it,” she affirmed.

Amina Mohammed added that the Fifth Meeting of the Forum on Sustainable Development must serve to chart an ambitious path forward.

“This is a region that can and must lead the way,” she urged.

In her remarks, Alicia Bárcena, ECLAC’s Executive Secretary, said that we are facing a true change of era where structural problems converge with serious circumstantial difficulties.

She added that the global asymmetries between developed and developing countries have deepened, affecting the middle-income nations that include the majority of countries in our region. Furthermore, gaps have widened on access to vaccines, to financial resources, and in the capacity to implement initiatives for the economic recovery.

Alicia Bárcena indicated that access to vaccines exposed the fiercest nationalist tendencies. She specified that Latin America and the Caribbean was affected by trade protectionism on medicines, equipment and vaccines that prompted the consideration of a plan for self-sufficiency in health matters with a regional perspective, which was approved unanimously by the heads of state and government of the 32 countries of the Community of Latin American and Caribbean States (CELAC) on September 18, 2021.

She noted that while the average total vaccination rate in the region is high, reaching 62.6% of the population, the Caribbean – with the exception of Cuba and the Dominican Republic – has only been able to ensure full vaccination for 14.7% of its population.

ECLAC’s highest authority stressed that this singular time should redouble Latin America and the Caribbean’s shared vocation for closeness, integration and fraternity and be the foundation for a change in the development pattern.

“Our region faces major challenges today, but it also has multiple opportunities to achieve long-awaited development with a vision centered on equality, social justice, sustainability, democracy and peace. I am convinced that it is possible for the region to raise its voice in unison amid the historic challenges that this crucial time has prompted us to address,” she concluded.

After the inauguration, Alicia Bárcena presented the document A decade of action for a change of era, which reviews progress and challenges in relation to the 2030 Agenda for Sustainable Development in Latin America and the Caribbean.

The report analyzes the growing global asymmetries between developed and developing countries, along with the economic, social and political effects of COVID-19 in Latin America and the Caribbean. It affirms that the recovery has furthered a development model that had already shown its structural limitations, which imposes growing costs and moves away from attainment of the SDGs.

According to the document, 68% of the sustainable development targets continue along an insufficient path towards 2030. It warns that just one-third of the 111 targets of the SDGs are on the proper pace and trajectory in Latin America and the Caribbean.

“These results reinforce the need for a decade of action to transform the development model based on effective multilateralism,” the senior official emphasized.

During the meeting’s opening session, ECLAC’s top representative received numerous expressions of recognition for her work over nearly 14 years at the helm of ECLAC’s Executive Secretariat, a term that will come to an end on March 31.

“Dear Alicia, thank you for accompanying us in our struggles and our ideas. Thank you for making us believe, with information and analyses, that it is possible, that Latin America and the Caribbean can have its own path and that our destination can be promising,” President Carlos Alvarado stated.

“Your work, leadership and forward-looking vision has been inspiring,” the Costa Rican leader added, announcing that in recognition of her hard work and dedication, the Government of Costa Rica decided to award Alicia Bárcena with the Grand Cross Silver Breast Star of the National Order of Juan Mora Fernández.

Amina Mohammed, meanwhile, expressed her appreciation to ECLAC and, in particular, to its Executive Secretary.

“After 25 years of service in the United Nations and 13 years leading ECLAC, this will be her last big gathering as Executive Secretary of ECLAC. Alicia’s leadership and energy have been instrumental for Latin America and the Caribbean. We will all miss her deeply,” she said. 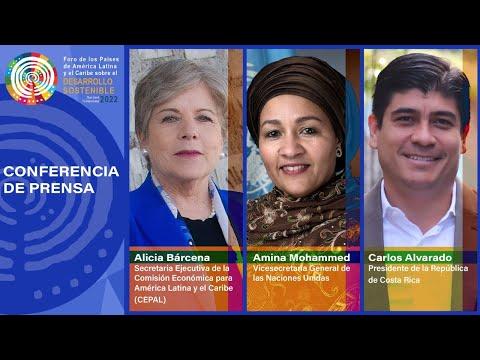 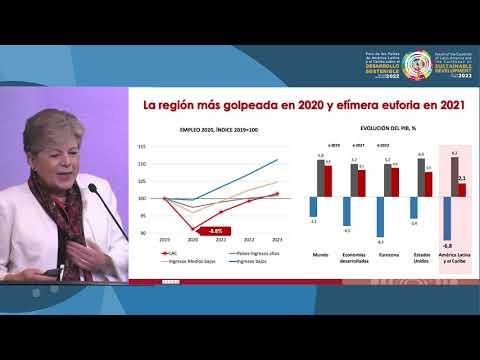 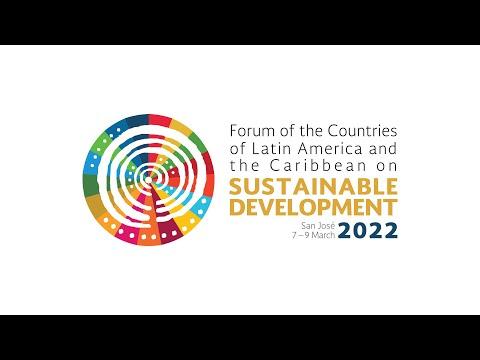 A decade of action for a change of era